I always start out the holiday season with these unrealistic expectations for our Christmas to be “special”. I blame it on the Christmas movies we watch that have magical life changing moments, a heartwarming soundtrack, and snow. Always snow. It also doesn’t help that I used to work at Disneyland on Christmas, the mother of all special places. Disneyland always has a heartwarming soundtrack, magical memories being made, and snow. No wonder I feel the pressure!

This year, I was so good about ordering holiday cards, keeping my work schedule slow (maniacal laugh), and getting Christmas presents purchased early. I didn’t have the shock that I did last year when all of my clients wanted their photos before Christmas, and I was more prepared and better at meeting almost all of their requests before the holidays. When it was time to leave, I had finished nearly all my work and I was glad to be able to relax and enjoy the season. My family couldn’t wait to get to Fresno to see my extended family, and really enjoy the season for a few days, with no computer and nothing but family.

Of course, things don’t always happen as planned. On the morning of my dad’s Christmas, I woke up around four in the morning to a nudge and a bewildered and frantic little voice saying, “momma, something is happening!?!?”

Two seconds later I realized that the “something happening” was him about to throw up on me.

Having no prior reference a throw up bug, for the rest of the night he told me he had bad burps. I’m so glad he made it through three and a half years of life without having the flu. It was not fun.

*sigh*, so we thought he had food poisoning or something had upset his tummy because he felt better very fast. Within about six hours, he was up and playing and feeling fine. The next night though, our household realized it wasn’t food poisoning, because whatever illness he he had began to spread through our family like wildfire.

So, this is how we spent Christmas this year. It was pretty disappointing: 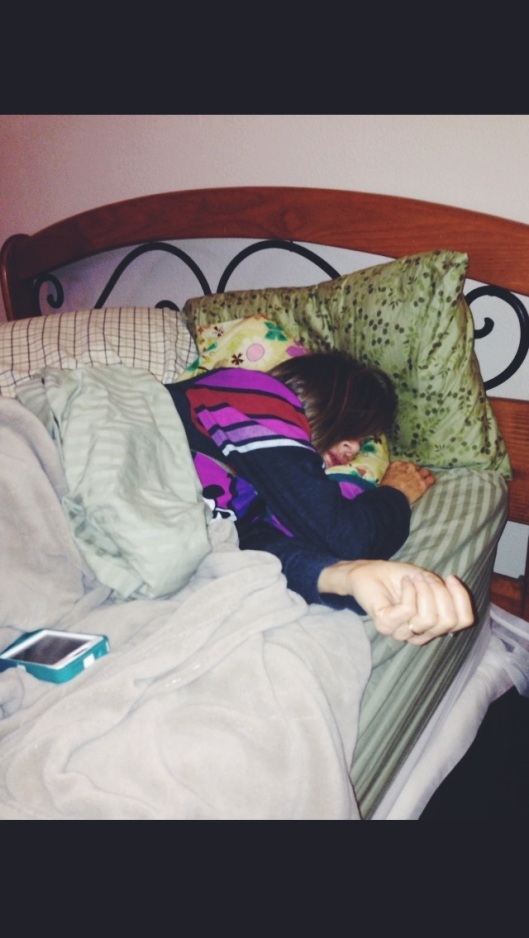 On Christmas Eve, everyone who wasn’t exposed dropped by and opened gifts from outside the door.

This is the second year in a row that the flu has hit us during Christmas. Next year, I think we’ll take Little T out of daycare the week before the holidays so that he doesn’t get whatever daycare bug is going around. I’m so disappointed that we didn’t get to visit and spend time with everyone, and so grumpy that its been two years now that our Christmas has looked like this.

But the weird thing is, I feel a lot better now that the holidays are over. There isn’t this feeling of pressure to get everything done before a certain day. I feel like things can get back to our normal routine without having to put so much stuff into only one month. So maybe, even though this Christmas wasn’t what we pictured, maybe I need to not have so much emphasis on the importance of one day? I haven’t formulated all of my thoughts on it yet, but I have a feeling I’ll be easier on myself next year because of this. We’ll see.

With all that said, I’m still going to keep Little T out of daycare the week before we go down for the holidays, being sick is no fun, peeps.

P.S. as a side note, our holiday cards will be late this year because we were all so sick, but they are coming! 🙂

P.P.S. This was written from my iphone, so please excuse the typos!