This first one was taken at Trader Sam’s, the newly revamped bar in Downtown Disney. Sure, the drinks were expensive and there was absolutely no vegan food to eat, but we wanted to check it out with our friends anyway because we heard it was a fun place. I asked the bartender if he had any vegan food. He said he’d get me something and came back with a plate of drink toppers, hardy har har. It had olives, strawberries, pineapples, and lemons. You’ve got to hand it to him for trying.

Our friend-I’ll call him the Great Randini-his chair mysteriously began to shrink. They also had thunder storms and entertainment inside. It was a blast, but I was glad to get back to my snugglebug at the end of the night.

My friends wanted to know why they weren’t ever in my blog. So, here they are:

I also went to a bridal shower for a friend who is getting married soon(!!!). I can’t wait to see their wedding.

Little T likes to wave at the cats. Poor thing, he doesn’t realize they are running from him in fear, he thinks they just like to make him practice waving goodbye. Here he is, waving at Daphne while she looks down at him from the top of the cabinet. 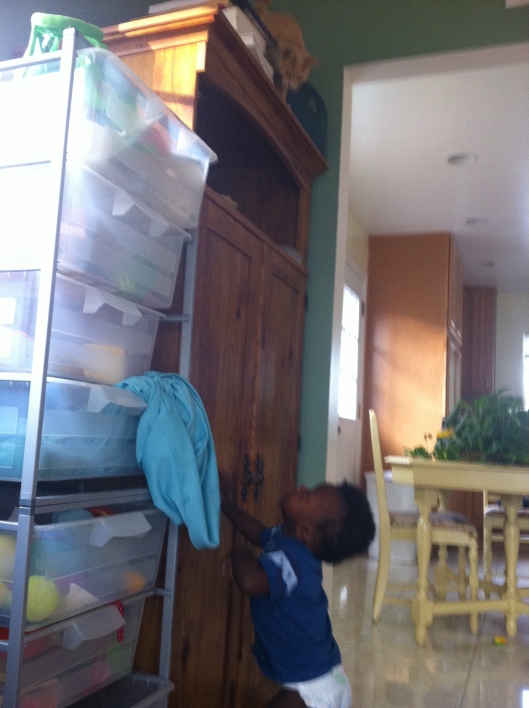 Speaking of the cats, we had to make a trip to Ikea because we’re going to be putting up cat shelves in the house. We want the cats to feel comfortable hanging out in the living room, but certain babies and doggies are always too excited to see them and make them run off.

When we were at Ikea, we found a doll for Little T. He loves it and snuggles it all the time. The only problem is that it looks a little too much like Little T. We keep seeing the doll around the house, facedown on the floor, and freak out because we think it’s Little T. 0_o

Big T also found a couple of dolls, but I told him we couldn’t afford it and he’d have to use one of the carrots from the fridge to snuggle with instead.

Hope you all had a good week,