…he’s getting all of these good things to eat this week, but he’s most definitely not complaining. 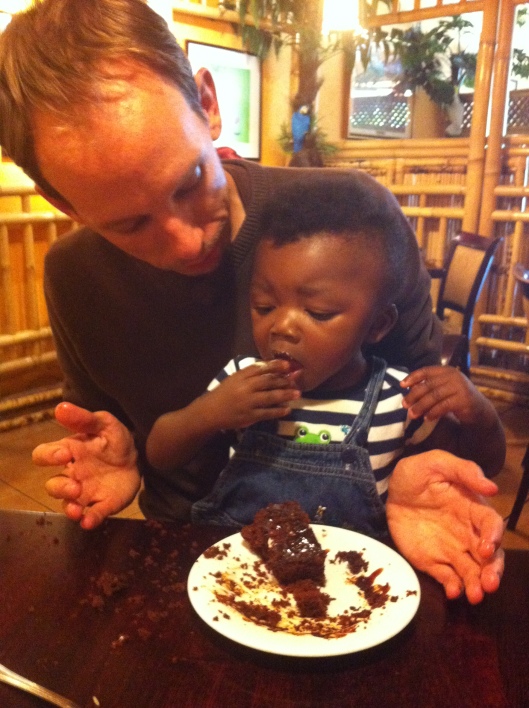 The T's enjoying some birthday cake.

Yesterday was Little T’s birthday. I had a lot of mixed feelings as I thought about Little T’s birth mom and his first day of life. It’s hard to know there wasn’t anyone there to hold him when he was born. I wish I could have been there to hold him and tell him I was happy he’d arrived in the world. Of course, Little T didn’t think about any of those things. He just smiled and plotted ways to get to the dog food.

We started the day by driving to Irvine to see a neurologist becase Little T has hypertonia (super baby muscles that can kick some major baby booty). We’d made the appointment as a precaution a few months ago, and his birthday was the soonest we could get him in. Not the best way to spend a birthday, but I promised we’d try to make it fun. We woke up at six and made our way to Irvine. For the record, Irvine is ridiculous. I lived there for a year and I still don’t know how to get anywhere. We drove around for 45 minutes before we found the doctor’s office, because my iphone was more confused as I was. It was like being in San Francisco or New York, only it was just Irvine.

Once we got in the exam room, I desperately tried to entertain Little T and distract him from his favorite toy, the doctor’s scale (definitely not my favorite toy-thank you very much. The doctor eventually came in to let me know she’d had three patients who’d been rushed to the hospital. She’d cancelled her other appointments and wanted to know if I could wait, since we’d already waited so long.

The doctor said Little T is doing great. He does have a lot of muscles, but thinks he’ll grow out of this. We’re going to do some testing just to be on the safe side.

Afterwards, we drove to Mother’s Market, a vegan cafe/grocery store that I hadn’t visited since my college days. I ordered a few things for Little T and myself. Our meal went like this:

Little T: “OMG, this soy bacon is my favorite!”

Little T: “Wait, I mean this quinoa is my favorite!”

Little T: “Holy guacamole, these mashed potatoes are my favorite!”

Little T: “THIS WATERMELON JUICE IS MY FAVORITE!”

Momma J: I’m guessing we have a lifetime of big grocery bills ahead of us.

After PT, we went to pick up Big T from work and drove to our favorite vegan restaurant, “One World Vegetarian Cuisine”. Little T was a restaurant pro, and couldn’t decide if he liked mom’s spicy food or dad’s pineapple rice. I can’t believe how much Little T eats. He ended the day with a big slice of chocolate birthday cake. He decided he liked this thing we call “cake”. He wanted to know why we don’t eat it for breakfast, lunch, and dinner. Oh, Little T. If he had his way, our house would be filled with chocolate cake and doctor’s scales. I’m not sure what to make of that.