Big T and I had an amazing time last weekend at the Labyrinth of Jareth. We’d heard about it from a few friends, and were excited to finally be able to go. We decided to go Steampunk, but we’re going to try something a little more spectacular next year because we felt inspired by all of the creativity in the room. 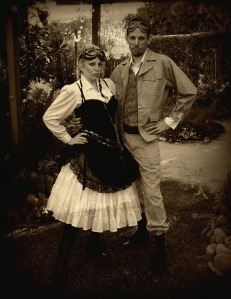 I remember back in the day, when store bought Halloween costumes didn’t exist and you had to throw a sheet over your head and poke holes in the eyes to be a ghost. Nowadays when kidlets knock on your door for Halloween treats you’ll see 10 identical Spidermen, 5 Batmen, and 2 Ironmen, and then a few Barbies or Disney princesses. I miss the clever costumes! That’s why I was in heaven at the Labyrinth of Jareth. Everyone put so much thought and time into their costumes and they all were stunning. It was a great people watching event and I loved walking around and taking in all of the creativity.

It was the coolest date night we’d ever had. Everywhere we turned there were performers and musicians and dancers. There were three stages and the shows were constant. We were never without something to do. There were so many things to look at that it was overwhelming at first. We walked around and danced together until our feet were so swollen that we couldn’t dance anymore.

We were sad when we had to leave at midnight, because we didn’t want Big T’s mom to have to stay up much longer with Little T. It was really nice of her to babysit for us when we were staying out so late. On the drive home, we talked about all of the costumes we saw and how great everyone looked and tried to decide which costumes were our favorites. We were hungry and felt like teenagers when we pulled into the Taco Bell drive through to grab something to eat. I don’t think I’ve had fast food for six+ years! I probably won’t have it for six more, but it was a fun way to end the night. We ate in the parking lot, talking the entire time, and were still hungry afterward so we laughed and drove through the drive through again.

Little T wasn’t having any sleep that night, so it was hard when we got home. We were both really tired the next day. It was worth it though, what a night. 🙂